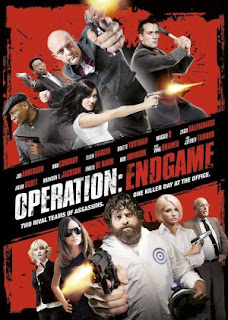 On the surface, it looks like it should do well. Rob Corddry, Ellen Barkin, Zach Galifinakis, Adam Scott, Brandon T. Jackson, Beth Grant, Bob Odenkirk, Michael Hitchcock, Tim Bagley, Ving Rhames and Jeffrey Tambour are like a who's who list in the character driven world. Even if their names do not ring a bell for you, one look gives you a healthy dose of 'that guy' syndrome. These are all people who are memorable in any role they play, that's why they are character actors.

Round off that list with Joe Anderson, Odette Yustman, Maggie Q, and Emilie de Ravin, all of whom would do well as character actors themselves and this should be a brilliant film.

Unfortunately, I have been betrayed by character films before.

To begin with, this movie does in fact have a plot. Not much of one mind you, but it does in fact attempt to layer a story in there. As far as stories go, it doesn't, but that's not rally a bad thing in this instance. Making a movie is about see-sawing back and forth, trying to give the audience enough of a story to drive the characters without bogging the whole thing down with details. The director understood that this movie is all about the characters so plot could be kept to a tight minimum.

So what is the plot? It's about impossible to do a spoiler but I'll try;

That's it. That's the movie. What's the plot twist you ask? I won't tell you because you'll probably figure it out as soon as act 2 begins.

So, the plot is really weak but that's just means it needs to be really character driven. How does it do?

"Fool" (Joe Anderson) is our main protagonist. Joe does not have the resume of some of the other cast, but he's definitely a man to watch. He slides right into the role and it's easy to feel some empathy with him. He really represents the viewer, confused and scared. You won't get any singing from him this time, but that's okay. I figure if he sang in this movie, Rob Corddry might have to as well. Speaking of...

"Chariot" (Rob Corddry) steals every last scene he's in. I suppose he can't really help it though. He's got more screen time and more memorable lines than anyone. It does make sense since I suppose he's the only other character you really empathize with. He is another "Fool" who has been in the spy business so long that he has no other life. He even gets the only really touching moment in the film when he spells that out for the viewer. Though his performance is way over the top it never takes away from anyone else because he really defines what this spy organization is for each of the other characters.

"Devil" (Jeffrey Tambor) throws in for two whole scenes. Lucky for us, he also gets an over the top performance worthy of him. He probably doesn't deserve a whole paragraph to himself, but come on. It's Jeffrey Tambor.

The rest of the cast fills out the Tarot deck and predictably do very well. They all know what being a character is about and they give it to the viewers. The worst thing you could do with any of them is kill them off before they get to show us these wonderful characters (I'm looking at you Smokin' Aces

!). Luckily, we get to see enough of each of them to be interested.

The only holdout in this list would probably be "High Priestess" (Maggie Q). Her history has been more into story driven movies, which is particularly funny since her biggest break was working with Jackie Chan. She really gives it her best shot. Admittedly, she is really hot and that goes a long way in any movie. She also has experience fighting on screen and doing her own stunts, and in a movie about assassins, that is important.

The fight scenes in this movie are reported to have taken only twenty minutes to shoot. Don't expect a bunch of brilliant choreography or skilled technical fighting here, especially since there are chicks fighting. Don't you just hate it when chicks 'play tough' in the movies and they look like cartoon characters?

Well, there's none of that here. The fighting is nasty. It's ugly. It's kinda... real. Maggie is perhaps the best technical fighter here and she looks great, but she loses. She fights dirty but her opponent fought dirtier and got lucky. Corddry is supposed to be an old hand and really respected as a killer but he still gets hurt. This is one of the few times I've watched people fighting in a movie and I actually believed they were trying to kill one another. Even "The Hermit" (Zach Galifinakis) is really scary. There is very little actual fighting going on in this movie, and there are one or two scenes that go a bit over the top, but it was actually a pleasure seeing it here.

If there is one point of weakness in this movie, it's probably "Temperence" (Odette Yustman). I don't think this was a failing of the actress herself (yeah, being sexy does influence my reviews a bit) but more from the fact that the character was less well defined. In order for the story to move on, her character had to break character pretty dramatically. Like Maggie, Odette also has less experience in character roles and I wonder if a more experienced character actor could have brought me to overlook this fault.

It's not as pretty as Mean Guns

, but it also doesn't loose sight of it's characters like in Smokin' Aces

The rating system is based on the individual opinions of the reviewers.

4 Stars - Reserved for the top-rated films that really stood out to the reviewers.

3 Stars - Good films that had a few flaws that the reviewer found distracting, but still ultimately enjoyed the film.

2 Stars - Decent films that still had more than a few distracting flaws in the delivery.

1 Star - Films that were not necessarily good, but had some watchable merit to them.

0 Star - Films that the reviewer found to be terrible for several reasons, and in some cases, even unwatchable.

Search for a Film Review