Ever see the movie Open Water?  If you have, then you already have a pretty good idea of what you are in for while viewing The Reef. People get stranded in the middle of the ocean and basically ring the dinner bell for sharks.

Look at the movie posters, for cryin' out loud. That pretty much tells you everything you need to know. 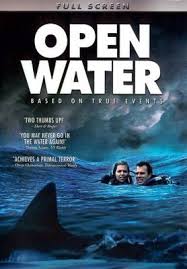 It's really hard to expect much from a film when it doesn't even bother to hide the idea that it is riding such blatant coattails.

This film is also supposed to be based on a true story. I don't know the story itself, and asides from the nagging feeling that I'd seen this story before I had a very hard time believing that this actually happened.

Let me clarify my reasoning here. I'm not altogether unfamiliar with great white sharks. I know that the Jaws genre movie-goers were raised on the idea that white sharks will relentlessly hunt down humans and consider them to be a fine delicacy.

But they aren't. They don't even like the taste of us. Almost all accounts of great white attacks are exploratory bites... just enough for them to figure out that we aren't seals. If they take a nibble of something they like, they are also prone to executing a surprise attack from below.

Tiger sharks, on the other hand, will follow a food source and gobble up damned near anything that looks even remotely edible. Including turtles.

That being said, I had a hard time buying into the true story angle as soon as I identified the shark. (At least Open Water did a good job casting its sharks!)

But there was another thing that really did me in on this film. It plodded along slowly and relied heavily on red herring scare tactics for over an hour. (aka "AHHH.. oh, it's just the cat" moments.) That is the problem with plots involving a small cast stranded somewhere without a lot to play off of... if you take away all the false starts, scenery coverage, and stock footage you just end up with an expensive short film.

While the characters were fairly believable once the shark showed up, I really didn't care about them. Nor did I root for the shark to eat any particular one of them.

One thing I will say, they did a decent job with the shark attacks. Kudos to the editor here. I imagine that anyone with a serious shark phobia would hit the ceiling multiple times while watching this film.

But overall, I really didn't care for it. I honestly wanted to turn it off after going about 70 minutes into it, but decided that I'd waited so long to see the damned shark that I might as well just ride it out.

The rating system is based on the individual opinions of the reviewers.

4 Stars - Reserved for the top-rated films that really stood out to the reviewers.

3 Stars - Good films that had a few flaws that the reviewer found distracting, but still ultimately enjoyed the film.

2 Stars - Decent films that still had more than a few distracting flaws in the delivery.

1 Star - Films that were not necessarily good, but had some watchable merit to them.

0 Star - Films that the reviewer found to be terrible for several reasons, and in some cases, even unwatchable.

Search for a Film Review